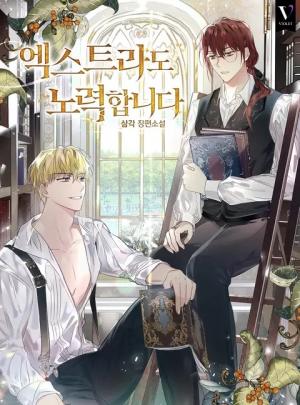 A train journey to escape from reality.

When I came to my senses at some point, I felt like I was in a fantasy novel I had been reading a while ago.

It was also possessed by the body of an extra whose name was not mentioned in the original work!

‘Does this make sense?!’

The original work had already begun without the man even getting to his senses.

The man, now ‘Nathan Norbert’, tried to make a connection with the original protagonist in order to survive from the original incident that would take place three years later…

“What are you doing there?”

It was a good thing there was no backlighting. If there were, he wouldn’t have noticed immediately who the boy standing in front of him was.

The gold colour, like melted gold, shimmered even in the gloomy weather. His cool eyes were slightly frowning as if puzzled and, blue like the summer sky, were looking straight at Nathan.

This person is Hazard.

His name is Hazard Erasmus.

Indeed, the boy in front of him was exactly what Nathan had envisioned while reading . So he had no choice but to recognize it at a glance. He couldn’t have dared to imagine a protagonist other than this figure.