Exorcism Through Climax With a Single Strike! 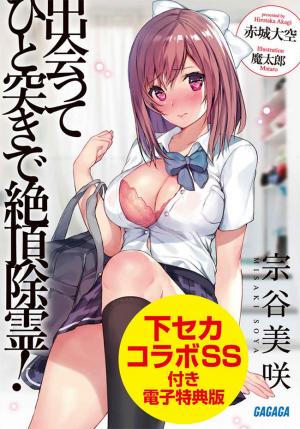 An obscene ability that forces anyone struck by it to climax, regardless of whether they are living or dead. As a bonus, it also forces evil spirits and monsters to ascend to heaven.

This is a world where evil spirits and monsters are everywhere and being an exorcist is a real job.

From among promising boys and girls, those with talent are trained at the “School for Exorcists”.

Furuya Haruhisa is a boy cursed with the ability, climax exorcism, and is also the school dunce.

Using the ability could lead to his social death…

But then, Haruhisa meets her.

Soya Misaki, a girl who possesses a similarly cursed pair of eyes–demon eyes.

A fearsome pair of eyes that can effortlessly reveal people’s secrets.

And so begins the legend of how history’s worst exorcists come to be known as the strongest before anyone realizes it. Their first real job results in a big fight with a monster woman who runs away from boobs.

A coquettish voice echoes throughout the neighborhood tonight.

It is, without a doubt, evidence of an ascension.

Can the clumsy exorcists win using their obscene abilities?

Can ero save the world?