Demon King on the Border 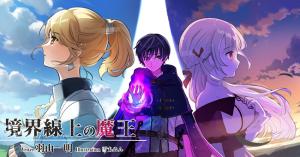 Altia is a continent where humans and non-humans live together.

One day, the great river that crosses this continent from east to west transformed into a magical wall that pierces the heavens.

No one knows why it was created or for what purpose. The wall, which swallowed up the magic of anyone who came near it along with their life, later came to be called the “boundary line” and cut off communication between different species for a long time.

The humans, fearful of the boundary line, punished anyone who touched the wall without permission, and gave the title of “Holy Knight” to those who had the talent to resist the magic of the wall, and authorized them to travel and investigate beyond the wall.

……Time has passed, and it’s the present day.

It was the night that Paladin Christia completed her third trip to search for her missing predecessor, the Paladin.

In the midst of the clamor of the triumphal return ceremony, she is confronted by a lone swordsman.