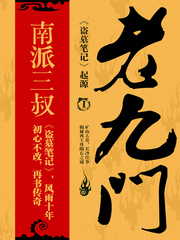 During the Republic Era, the town of Changsha was guarded by nine families known as the “Old Nine Gates” (or the “Mystic Nine”). They were incredibly powerful families who wielded supreme power over everything in Changsha.

In 1933, a mysterious train pulled into Changsha station. The leader of the Nine Gates, Zhang Qishan, was also the army commander of Changsha station and started to investigate with Qi Tiezui. They discovered a highly suspicious mine just outside of Changsha.