Dancing in the Legendary Sea 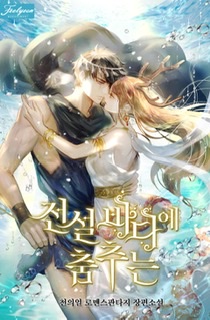 Decades after Minotaur, the God of Crete, was eradicated.

There was a new rumor in Delos, the sanctuary of ancient Greece.

The beast that will confuse the outside world and the curse of the goddess.

Rumor has it that ‘the goddess of artemis’ is in ruins.

The main character of the rumor, Lokira, was born with horns on her head.

‘The horned monster shouldn’t go out into the world.’

‘You can’t even meet a man outside.’

‘If you leave the sanctuary, you never know when you’ll be hunted by someone.’

Maybe she’ll live the same life as he is.

However, even in life, such as stagnant water in a jar, an unexpected event comes.

A man with a scar on his face floated down.

A hunter from Atlantis.

“I changed my mind a little. Let’s get out of this island.

I can’t stand to see you die.”

After an irresistible salvation,

Lokira, who opened her eyes, was already in the middle of the Aegean Sea.

And the lord of the sanctuary proclaims to the nations of Greece.

A successful country gains the supremacy of Greece.”