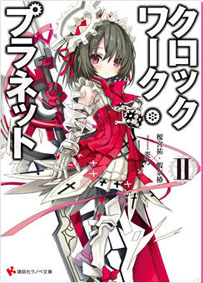 At a unspecified point in the future, the Earth dies. Then, a genius engineer only known as “Y” manages to revive the Earth using only gears and clockwork. Thus the world is renamed “Clockwork Planet”, with cities being build inside the planet’s gears. A thousand years later Naoto Miura, a student and lover of machines living in the Kyoto gear, finds a crate has crashed through the roof of his apartment. Inside the crate is a coffin containing the broken body of an automaton. Using his superior sense of hearing, Naoto fixes the automaton, who is named RyuZU YourSlave, who reveals she has been broken for over 200 years. RyuZU promises complete loyalty to Naoto and the two become close. Later they meet two people trying to find RyuZU: Dr. Marie Bell Breguet, the youngest person to become a “meister”, a group of master engineers; and her bodyguard Vainney Halter. A month after their encounter, all four appear in Akihabara, Tokyo, having now become the world’s most infamous terrorists