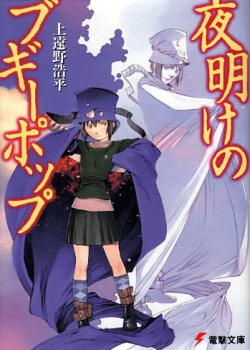 There is an urban legend about a shinigami that can release people from the pain they may be suffering. This Angel of Death has a name — Boogiepop. The legends are true. Boogiepop is real.

When a rash of disappearances involving female students breaks out at Shinyo Academy, the police and faculty assume the girls have run away. But Nagi Kirima knows better. Something mysterious and foul is afoot. Is it Boogiepop or something more sinister…?

Told in a non-linear fashion that invites the reader to piece together the sequence of events and solve the mysteries alongside the characters, Kouhei Kadono’s first Boogiepop novel took First Place in Media Works’ Dengeki Game Novel Contest in 1997 and ignited the Japanese light novel trend. Today there are more than 2 million Boogiepop novels in print, plus a manga series, a live action feature film, and an unforgettable anime series, Boogiepop Phantom.

In 2006, Seven Seas released the first three Boogiepop novels and manga to critical acclaim. Now, Seven Seas is pleased to relaunch the novels in their original light novel format, along with three never-before-released novels starting with Boogiepop at Dawn, which chronicles the long-awaited origin of the mysterious Boogiepop.