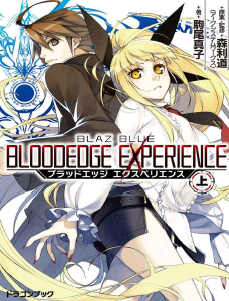 A spinoff alternate universe light novel from the universe of Blazblue. Technically takes place between the third game in the series, Blazblue Chronophantasm and Blazblue Central Fiction, explaining the new character Naoto Kurogane’s background. The release dates coincide with this viewing order as well.

There are two parts, but it is treated as a separated single volume, chapter numbers carrying over between the two novels.