Bijo to Kenja to Majin no Ken 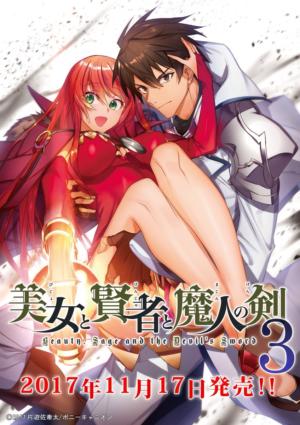 Kei Arakawa, an average salary-man somewhere around his thirties, fell into a chasm between worlds. In exchange for a single limitation, he gained the ability to perceive someone or something’s status. But apart from that skill, he has no skills any ordinary person wouldn’t have. All he could do after ending up in another world, was to gain insight into something’s status, and use that information for his own growth and survival.

One day, as Kei was being assaulted by enemies, a certain individual appeared and saved his life. But it just so happens that this individual has an enormous secret――

This is an adventure fantasy where our MC encounters some beautiful women in another world, and throws himself into fierce battles with powerful beasts.

This series has been adapted to a manga, with updates being published under the Comic Valkyrie label.

This novel is a recipient of the 3rd annual WebNovel Award, with three volumes published to date.