Beware of the Villainess! 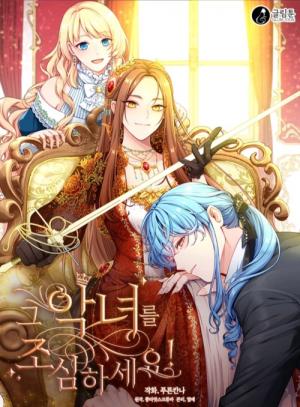 I transmigrated as the villainess of a novel.

So what if I’m a villainess? As the daughter of a Duke, I am rich and unemployed! I’ll simply live a leisurely life … or at least, that was what I thought until I witnessed my fiancé, the Crown Prince, having an affair right in front of me.

I shed tears when I saw him laugh with another woman in his arms, and did not reveal my emotions. Instead, I asked him a question with a bright and happy expression on my face. “Are you a son of a b*tch?”

She was dropped in the world of a novel and planned on overthrowing the original novel’s plot!

A refreshing, unique villainess who’s been dropped in the world of a novel, only to overthrow it all! The reason why? She couldn’t just stand by and watch the female lead be manipulated by all four shitty male leads. The story of a pragmatic villainess who intends to throw out all the jackasses, the friendly heroine who is equally miffed at said idiots, and a wolf that only yearns for the villainess!