Beware of the Brothers 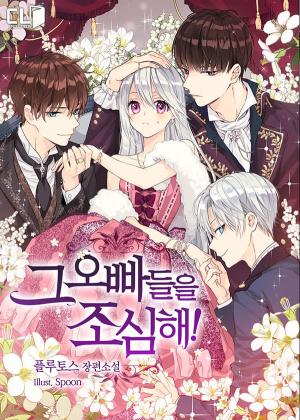 Hari, a destitute girl, got adopted by Duke Ernst at 7 years old when she lost her mother, as the Ernsts had themselves lost their youngest daughter Arina and sought Hari due to her resemblance to the late girl. Even though she received all kinds of persecution by the three Ernst sons in 20 years of life at the Ernst estate, she could finally escape that blood-and-tear inducing life when she was about to get married.

But what is this?

When I woke up from my sleep, I’m back to that hellish childhood! Is this a dream?!

Hmph. If I can’t wake up from this dream, I’ll at least live without too much consideration for others now!

Just like that, Hari decided to go astray. Eugene, the “dutiful son” but cold, Cabel, the roughhousing knucklehead, and Erich, the angelic-looking bully and Arina’s twin, all three be damned!