Ballad of the Desert 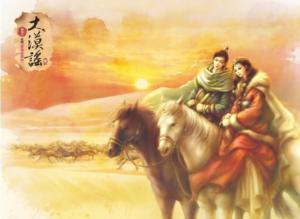 Yu Jin is an orphan, who was raised by wolves in the desert. She happened to meet a man of Han living with a Xiongnu tribe who takes her back to his camp due to her saving his life from thirst. She soon becomes friends with Xiongnu’s children. One year later, due to political changes, her foster father is killed. His only wish was for her to return to his hometown of Chang’an, in the Han Dynasty while hers is to live with the wolves for she has lost the one who she relied on. While going on life’s journey she met two men on the way hereby starting her story which will span years with so much colorful and stunning trials and tribulations