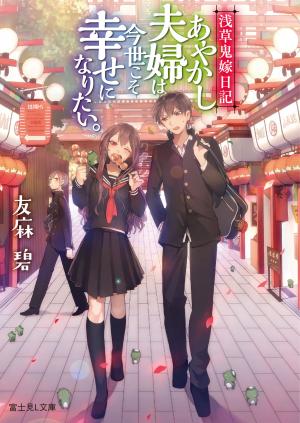 A former “strongest demon bride” runs for the sake of the ayakashi living in Asakusa city! A modern story of reincarnation.

Ibaraki Maki is a high school girl who lives in Asakusa and loves to eat Asakusa cuisine. Although she is a human, she gets involved in ayakashi-related business and solves them by brute force. She actually has a secret, that is, she remembers her previous life. In her previous life, Maki was not a human being but a demon princess named ‘Ibaraki Doji’ who was well-known during the Heian period.

With her classmate Amasuke Kaoru, who is the reincarnation of ‘Shutendoji’ who was also her ‘husband’ in previous life and Tsugumi Yurihiko, who was a former ‘Nue’, they travels around Asakusa to help troubled ayakashi such as Temari Kappa who is exploited at his part-time job and a family of Mametanuki who runs a long-established soba restaurant.