As Long as You Have the [Shop] Skill, the Dungeonized World Is a Breeze ~The Bullied Youth’s Payback Lifestyle~ 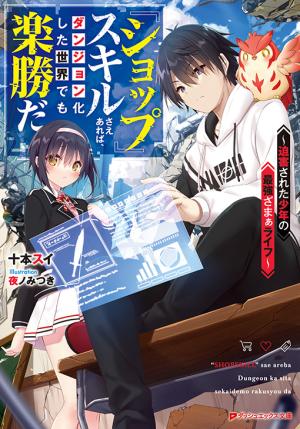 I, Bouchi Hiro, was ostracized by my entire school because I stood up against the student that held absolute power in my school. But no matter what kind of bullying I received every day, I never yielded. Today as well, I was getting beaten up behind the school building. But at that moment, I heard the students screaming―That was the moment when the world was transformed.

On the school grounds, the students were being attacked and killed one after another by monsters that seemed to have come out from an RPG. During all this, I managed to escape and make it back home. That was when I realized that I had a strange power dwelling within me. A skill called .

As long as I could pay for it, I could buy any kind item on Earth, and even fantasy items that couldn’t possibly exist on Earth. In this world where humans were gradually being weeded out, I decided to make the most of my new skill and live a slow, comfortable life free of worries.

It was truly thrilling and delightful to see all the people that hated and ostracized me being killed one after another because they didn’t have the same power that I did.

This is the payback story of a boy who was once bullied, and uses his skill to take advantage of those who now are left with nothing.