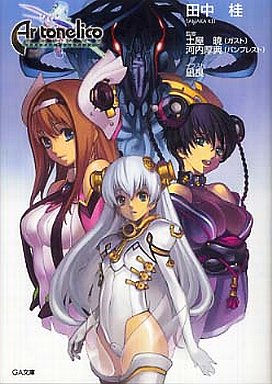 After the battle with Mir ended and the world was saved, Lyner and his friends were in the middle of a journey to gather the [feelings] they needed to craft a Song that would reach everyone in the world.

However, while the world should be peaceful again, various strange incidents have started happening.

Items produced through Grathmelding suddenly rose in price due to a shortage of materials, Tenba dismissed a large portion of their Reyvateil workforce, and this in turn caused these Reyvateils to begin falling into emotional instability one after other.

And finally, the Tenba troops have started a war with the Reyvateils at Skuwat Village, while a “mysterious entity” that seems able to control the common subconscious of the Reyvateils seeks a confrontation with Lyner.

The first novelization of the popular PlayStation 2 RPG of the same name!