A Bunny Delinquent Should Hide His Tail 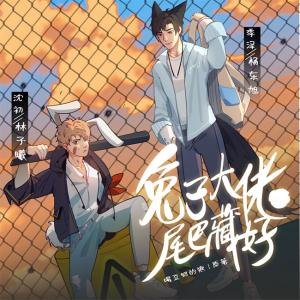 The year is 20×0, animal spirit personification has been legalised and they are given human rights. As a big, grey wolf, Ji Ze’s favourite thing to do everyday is to drink soy milk and pet his own tail. Until one day, while climbing the school wall after being late for school, Ji Ze witnessed a bloody battle. The young boy who was attacked wielded a metal pipe. His eyes shined red, but his blood was redder. Thick skinned and six foot tall, the boy pressed his tongue to his cheek, spitting saliva and blood over the pile of half-dead carnivores.

“If I didn’t eat grass, I’d f*cking barbecue all of you!”

Perched atop the school wall, Ji Ze realised with a start: wow, it’s a rabbit.

From that day on, to hunt down this rabbit named Shen Chu became a top-priority mission in Ji Ze’s life.

【The person who stands beside me, he’s just as strong as I am.】